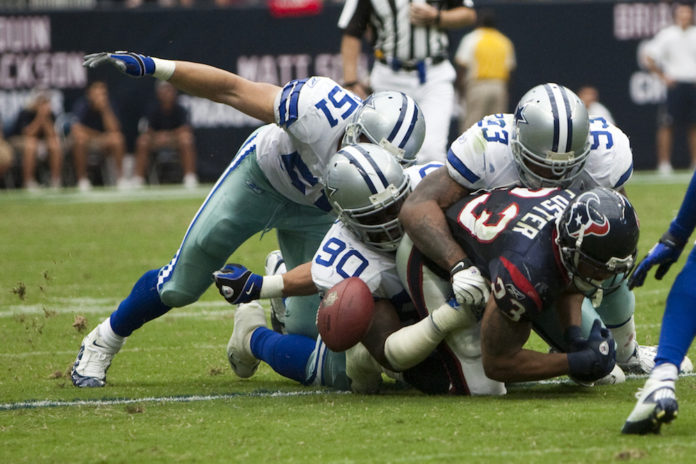 Everyone knows that one of the best ways to fight boredom is to play games. But over the years, the definition of “games” has evolved from referring to simple recreational activities in the real world, to roping in mobile apps, massive gaming console experiences, and much more.

Now it’s become clear that new technology such as virtual reality is poised to expand the definition of gaming once more. Because VR is capable of simulating real-world experiences and even replicating bodily senses and movement, the tech is able to marry the physical movement and tactile nature of real-life games with the simulation aspect and sensational activities of video games. With this in mind, fusing VR with the world of sports is beginning to seem like an irresistible opportunity.

Below, we will be looking at a few sports, some mainstream and some less so, that could make for particularly interesting VR games.

As action-packed and physical as football gets, injuries and especially concussions are all-too-common realities within the sport. That’s why the opportunity to play in VR could be particularly sweet; you could enjoy the thrill of successfully throwing a long pass, or kicking a game-winning field goal, without fear of injury. In fact, virtual reality is already being used by pro athletes and coaches themselves as they seek to revolutionize the way they train. Though only a select few teams like the Dallas Cowboys and New England Patriots have partnered with VR labs so far to use the technology, it may only be a matter of time before this sees widespread adoption. Hopefully fans, too, will have access to advanced VR football programs, so that we can all get a taste of what it’s like to play this sport at the highest level.

Maybe you don’t have the height for the NBA, or you can’t guard someone deploying a lightning-fast crossover. Whatever the specific reason may be, not everyone can be a pro hooper! But this is why you can probably just imagine the thrill of VR finally enabling the average gamer to throw down a slam dunk, or scoring a clutch buzzer-beater in a big game. The technology is actually already making its way into basketball, with VR labs counting a few NBA organizations among their clients and NBA commissioner Adam Silver has reportedly expressed an interest. But let’s hope that if and when the NBA adopts VR, fans, too, get access to high-tech simulators.

Though it may not be as well known as the sports mentioned above, Irish hurling is actually among the world’s oldest outdoor sports. Hurling basically combines elements of football, lacrosse, and field hockey, and in Ireland, it’s very popular. Matches often attract fans from across the country, and betting markets dedicated to the sport do regular, high-volume business online.

VR is an interesting idea here for two reasons. One is that it would allow fans to play without fear of getting hit in the head with a hurley (which is what they call the hard ball used in the sport). The other, though, is that a VR hurling game could just earn the sport the wider exposure it so richly deserves. Who knows? In this case, a good game might even lead to more real-world leagues around the world.

Similar to football, the very nature of boxing lends itself to a number of painful injuries. It is, after all, a combat sport. But with VR, players could have the opportunity to get the calorie-blasting benefits and undeniable thrills of a boxing match without having to worry about any of that. Combine this with the possibility of playing with friends, or playing through famous films or fights (Rocky franchise successor Creed already has its own VR experience), and the combination of boxing and VR might be a true knockout.