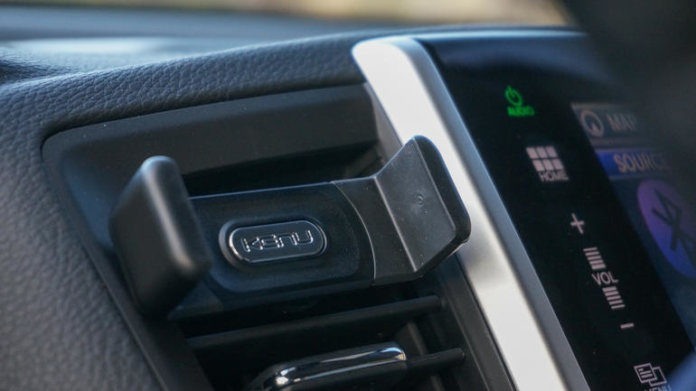 The Kenu Airframe+ Car Kit rolls two of the manufacturer`s automotive accessories — a smartphone vent mount and a dual port USB charger — into one package. But what I like the most about this kit is just how compact the components are, both when in use in the car and when stored in a backpack or glove box.

We`ve already taken a look at the first piece of this duo: the Airframe+. It`s an ultra compact smartphone mount. On the back of the mount is a small rubber gripper that is designed to grab the louvers of most vehicles` vents. The body is a C-shaped bracket stretches with spring loaded tension to grip cradled phone. With a maximum reach of about 3.4-inches, the Airframe`s grip is able to hold devices with up to a 6-inch screen.

The compact Airframe is barely there — only the tips are visible when a phone is mounted — and I like how the cradle snugs up nicely with most style vents for a low profile, flush mount. Only one of the Airframe`s two arms moves — the other is fixed — and the rubber grippers hold so strongly that I found it easy to place and remove my phone with one hand simply by pressing against the mobile arm.

I find that the vents are an excellent mounting spot for a phone because this position often places the phone high on the dash and near my line of sight when navigating, but doesn`t block any of my view of the road like a windshield or dashtop mount would.

The Airframe+ works with most vent types, but not all of them. Some vents provide a solid, upright mount and other tend to droop. I also fear that repeated placement and removal of the tightly fitting Airframe can put a lot of stress on the vent`s louvers, particularly on older cars where the plastic tends to get a bit brittle. And, of course, care should be taken to not overheat a phone by blowing heated air directly onto it when navigating the winter. (The converse situation is that in the summer, the air conditioner actually helps to cool the mounted device.)

The second half of this Car Kit is the DualTrip 4.8A, 24W charger. Like the Airframe, this 12-volt power adapter is quite compact, measuring just over 3 inches long and only protruding about 1.5 inches from my test car`s power point when plugged in. On one side of the DualTrip are two 2.4A powered USB ports, which supply more than enough power to charge a pair of large smartphones or even an iPad. There`s not much more to it aside from a small LED status light, but I like the unobtrusive design.

The DualTrip charger fits into the Airframe`s grip when the pair are not in use, creating a compact package that`s not much larger than a pack of gum. I change vehicles weekly due to the nature of my work, so having a mount and charger that don`t occupy a lot of space in my bag is a huge plus. Urban drivers who make frequent use of car sharing services (like ZipCar or City Car Share) or travelers who are often in rental cars will likely see a similar benefit to the Kenu Airframe+ Car Kit`s portability.

The kit does not include a USB charging cord to connect your phone to the DualTrip charger, so you`ll need to bring your own. I can understand why Kenu would do this — skipping the cord means that Android users don`t end up paying for a useless Apple cable and vice versa — and most users already have at least one charging cable lying around.

Purchased individually, the Airframe+ and DualTrip charger have MSRPs of US$30 and US$20, respectively. The Airframe+ Car Kit combo runs just $40 — a $10 savings. (Kenu`s website and materials do not list pricing for the UK or Australia.) The vent mount is a good solution for drivers who use their phone for navigation while driving, if your car doesn`t have weird vents that prevent the Airframe from sitting flush with the dash. The Car Kit is a great and compact package to pick up and keep in a backpack or stuff a stocking.

The New Shepard rocket and capsule, which is designed to carry six passengers, blasted off from a launch site in West Texas at 11:22am CST (5:22pm GMT or 10:52pm IST) and landed itself minutes later back on the launch pad, the company said in a statement.

The rocket that flew on Friday was the same vehicle that made a successful test launch and landing two months ago, demonstrating reuse, Bezos said in a statement posted on Blue Origin`s website 10 hours after the flight.

“I`m a huge fan of rocket-powered vertical landing,” Bezos wrote. “To achieve our vision of millions of people living and working in space, we will need to build very large rocket boosters. And the vertical landing (system) scales extraordinarily well.”

Fellow tech titan Elon Musk`s SpaceX in December successfully returned a rocket to a landing pad in Florida after it blasted off on a satellite-delivery mission.

Blue Origin and SpaceX are among a handful of companies working to develop rockets that can fly themselves back to Earth so they can be refurbished and flown again, potentially slashing launch costs.

SpaceX on Sunday attempted to land a rocket on a platform floating in the Pacific Ocean, but one of the booster`s four landing legs gave way and the rocket keeled over and exploded.

For now, Blue Origin is flying suborbital rockets, which do not have the speed to put spacecraft into orbit around Earth. The company is working on a more powerful rocket engine, with testing slated to begin this year, Bezos said.