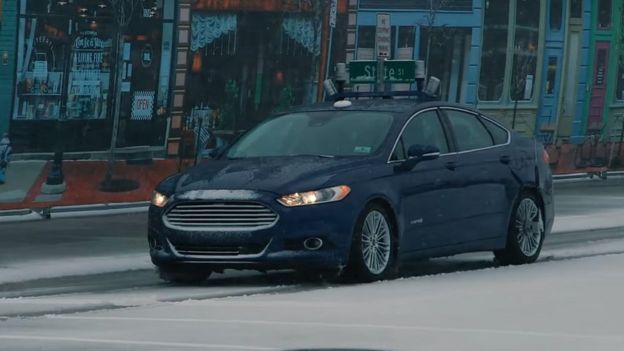 Motoring giant Ford says it has conducted successful tests of its driverless cars in snowy conditions.

The company said it had been running sensor tests for more than a year, but was now driving autonomous cars in a controlled, snowy environment.

Snow presents a challenge to driverless cars because the sensors they use to detect road markings and hazards do not work well in wintery weather.

Google has also been testing its autonomous vehicles in the snow.

Driverless cars use Light Detection and Ranging (Lidar) sensors to build a detailed view of the world around them.

Lidar works by rapidly firing laser light away from the car and measuring how much light is reflected back – a similar principle to radar, which uses radio waves instead.

But these sensors do not work well in snowy conditions, and the car`s onboard cameras cannot see road markings obscured by snow.

Ford said it had instead programmed the Lidar sensors to detect landmarks above the ground, such as buildings and road signs.

The car could then compare this information to an existing high-resolution map of the road – generated by autonomous cars during more favourable weather- stored in its computer.

This allowed the car to navigate the road even when visibility was poor.

Ford is the first manufacturer to test its vehicles in a model city built by the University of Michigan.

“We`re used to the conditions changing very rapidly. As humans, we understand that can happen and we know how to deal with it,” said Greg Stevens, who leads driver assistance research at Ford.

“We need to make sure that our autonomous vehicles can also deal with those situations in the same way.”

Rival car manufacturers such as Tesla, as well as technology giants Uber and Google, are also testing self-driving vehicles.

Tesla has already released a car with an “autopilot” feature that can take over driving on some roads.

On Sunday, the company revealed that it was developing an app that would let owners summon their car from a distance.

Tesla`s Model S and X cars can already drive themselves out of a garage when summoned, but the company`s owner, Elon Musk, told the BBC that people would eventually be able to summon their car across thousands of miles.