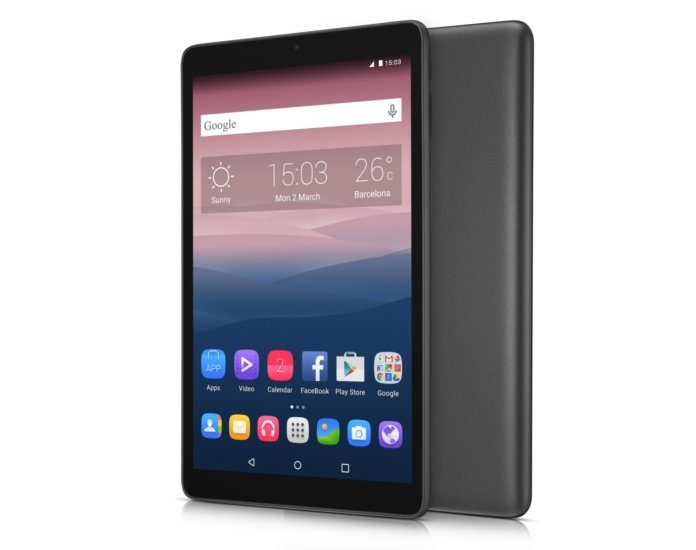 The company also unveiled its CareTime children`s GPS tracker smartwatch and the new Pixi 4 series smartphones, but did not provide any real details about them. More details about the products can be expected at CES 2016. To recall, Alcatel OneTouch is a mobile phone manufacturing brand of China`s TCL Corporation.

The company hasn`t revealed much of the specifications of the Pixi 3 Windows 10 Mobile tablet, though it adds that the tablet can be used as a TV remote control, and also for voice calling and GPS features. Users will be able to customise the Colour Skins and Flip Stand covers.

Alcatel OneTouch`s Android-powered Pixi 3 (8) tablet was launched earlier this year with an 8-inch HD (1280×800 pixels) display, a 2-megapixel rear camera, a 0.3-megapixel front-facing camera, MediaTek`s MT8312 dual-core processor clocked at 1.3GHz, 1GB of RAM, and 4GB of inbuilt storage that can be expanded via microSD card (up to 32GB). We can expect its Windows counterpart to largely have a similar set of features – however, with bumped up inbuilt storage, as we know Windows 10 Mobile requires at least 8GB of storage.

At this point, there is no word on how much the Windows-powered Pixi 3 will cost and when it will go on sale.

Alcatel OneTouch might be planning to launch two smartphones at the MWC 2016 trade show as they were briefly listed on the company`s support website. The webpage listed details about the upcoming Idol 4 and Idol 4S smartphones, giving us a fair idea about their innards. The images of the Android 6.0 Marshmallow-based handsets were also posted by the company.

Other specifications mentioned for the Alcatel OneTouch Idol 4S are 32GB of inbuilt storage, which can be expanded via microSD card (up to 512GB), 16-megapixel rear camera with dual-tone LED flash, EIS video stabalisation, along with an 8-megapixel front-facing camera with an 84-degree wide-viewing angle and a front-facing flash. A 3000mAh battery has also been mentioned. Connectivity features include Wi-Fi 802.11 a/b/g/n/ac, Wi-Fi Direct, 4G LTE, Micro-USB (with OTG), Bluetooth v4.2, GPS, and A-GPS. It measures 153.9×75.4×6.99mm and will weigh 149 grams.

The Alcatel OneTouch Idol 4 will house 16GB of inbuilt storage, which can be expanded via microSD card (up to 512GB). The support page also suggests an inclusion of a 13-megapixel camera with EIS and dual-tone LED flash, along with an 8-megapixel front-facing camera with 84-degree wide viewing angle, and a font-facing flash. Besides a smaller 2610mAH battery, rest of the specifications stay the same as the OneTouch Idol 4.